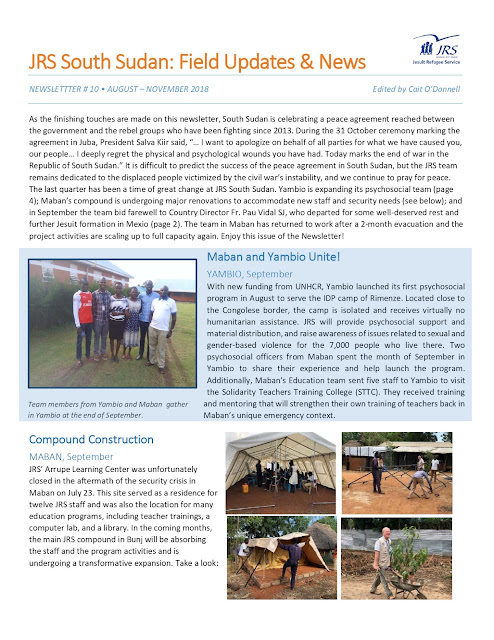 You can download and read the latest updates from JRS South Sudan here. 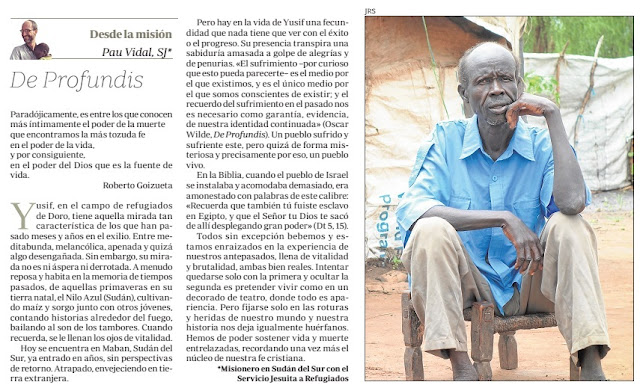 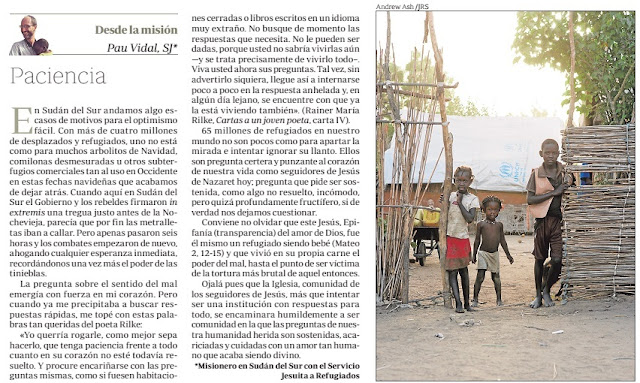 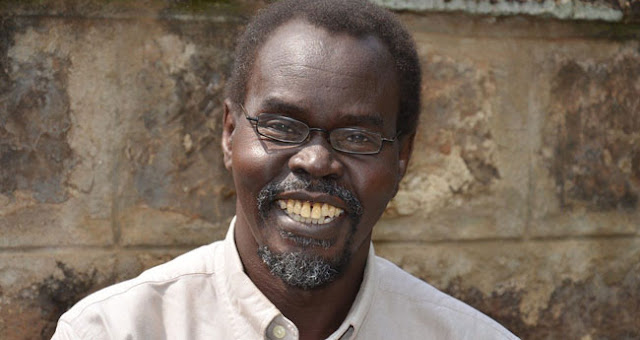 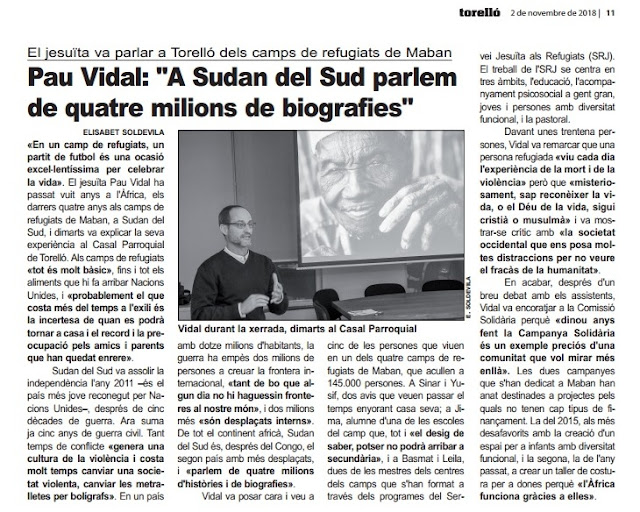 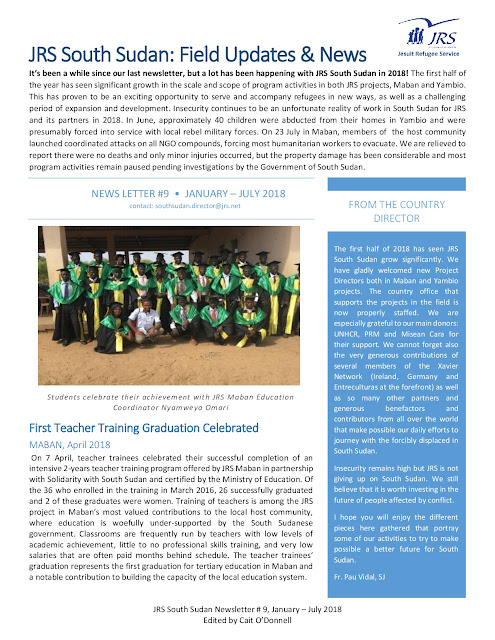 
You can download and read the latest updates from JRS South Sudan here.

CAT (not in English this time) 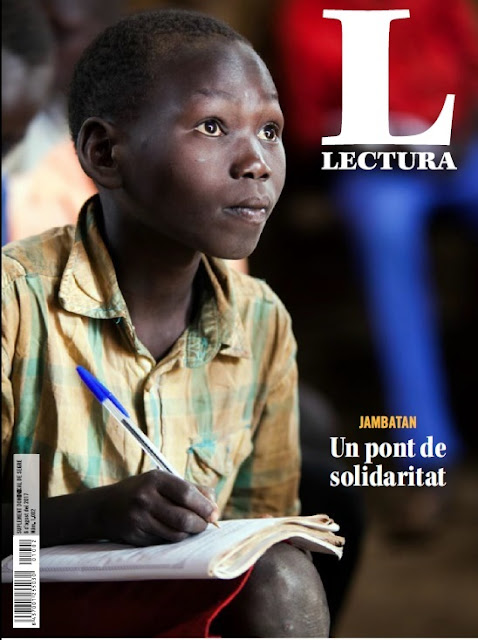 You will find these video and related stories of JRS Maban work produced by Misean Cara very inspirational: 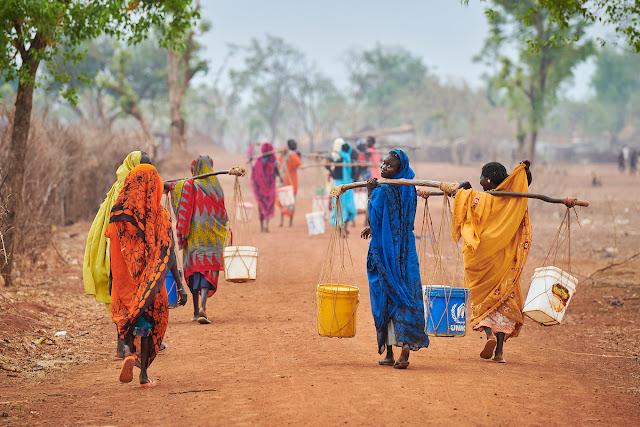 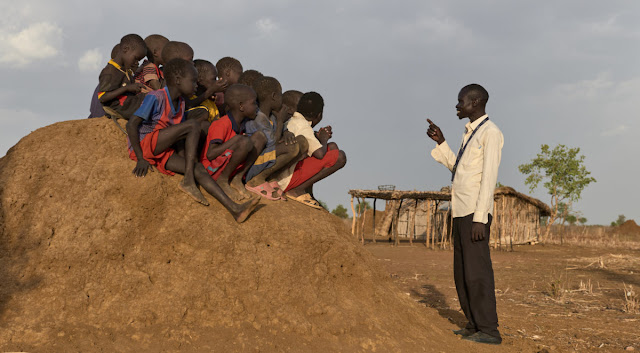 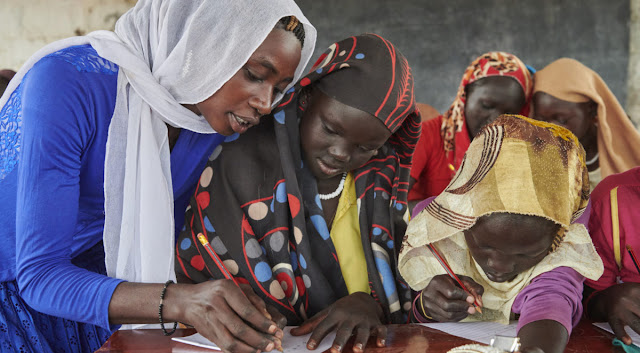 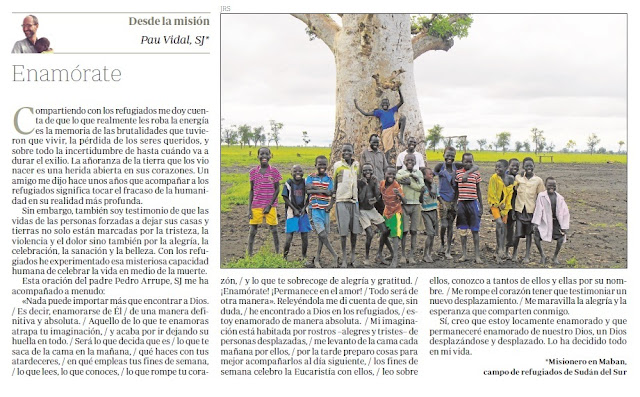 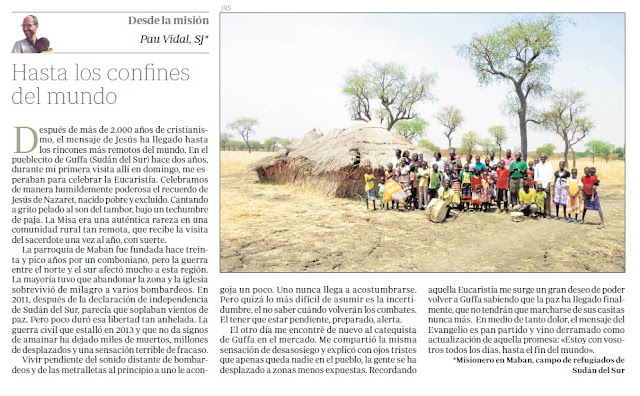 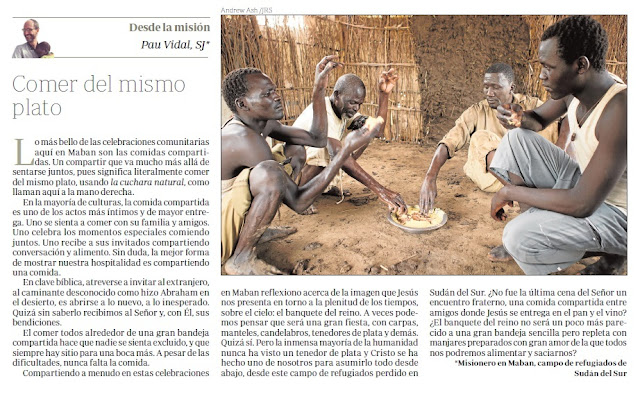 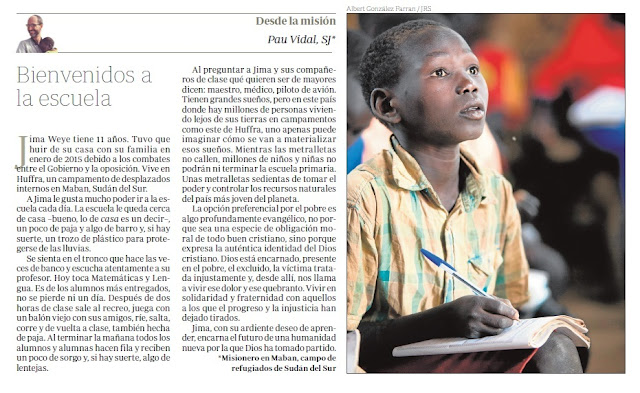 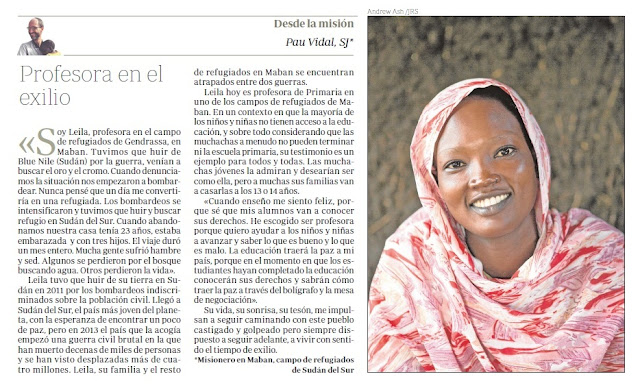 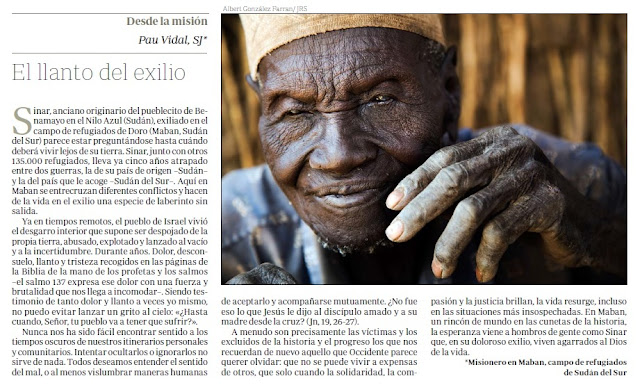 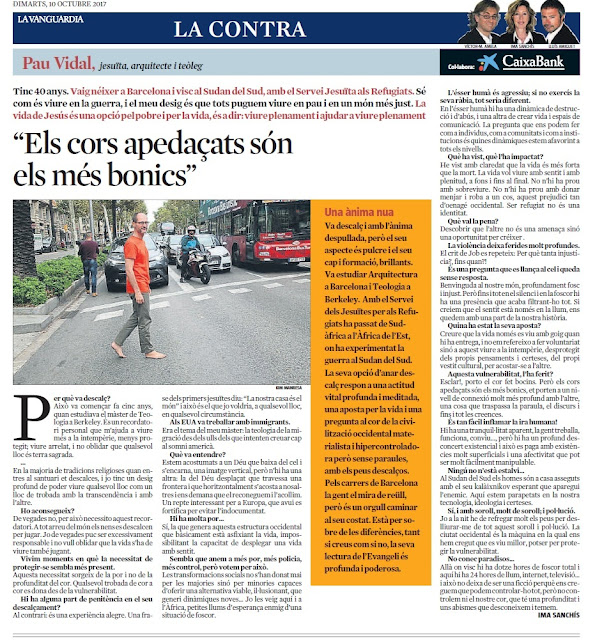 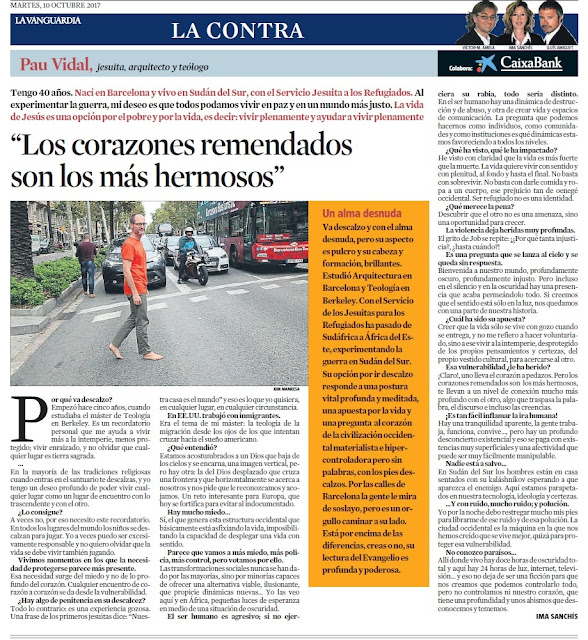 
Sinar was born in Benamayo, Blue Nile (Sudan) but has been forced into exile several times. Now, he finds himself stranded in Doro refugee camp in Maban, South Sudan.

He seems to be thoughtfully wondering until when will he have to live far away from his beloved homeland. He is part of a very large group of 140,000 Sudanese who were forced out of their villages by the bombs in late 2011. Sinar and his people are now literally caught between two wars, the one at home (Sudan) and the one that broke off in December 2013 here, in the country hosting them (South Sudan). In Maban, several conflicts overlap with no end on sight.

In former times the people of Israel grappled with the excruciating experience of exile, of being crushed and forced out of their promised land. For decades they were thrown into confusion and despair, as reflected in so many passages of the Old Testament, most especially the psalms and the prophets.

Being witness to this too long exile, one cannot avoid wondering why. Flipping through my journal I found this piece I wrote last Christmas:


During the last few days there has been intense armed fighting around here. On Christmas day we managed to celebrate morning mass but in the afternoon the shooting intensified and we are now holed up in our compound. Most of our neighbours have left their homes seeking for a safer place. Yesterday afternoon, sitting under the huge baobab tree in front of our house, Mary and Lucy, our two lovely little neighbours of 5 years of age, came to me and sat on my knees. Their mothers were hurriedly packing their few belongings, ready to flee, while the sound of shooting could be heard at a distance. Contemplating their little faces full of fear, remembering deeply desolated that I had already seen them fleeing in three more occasions recently, a desperate cry found words within my pained soul: ‘until when my God will your people have to suffer?’

It has never been easy for us human beings to reconcile with the dark and apparently senseless portions of our individual and communal itineraries. To try to ignore them helps nothing even if the flickering Christmas street lights and the consumerism frenzy seem to invite us to do so. Deep down though, we all long to comprehend the meaning of so much evil in our world. We desire to find humane ways of accepting it, lessening it and accompanying each other through it. Was not this what Jesus told his beloved disciple and his mother from the agony of the cross (John 19, 26-27)? Was not this what Etty Hillesum, in the midst of great persecution, also expressed by reminding us that “we should be willing to act as a balm for all wounds”?


In most places Christmas is a time for peace and joy. Here in Maban we have been reminded once more of the terrible mystery of evil, of the broken world in which God decided to become human. But that is not all. Because our God became human not despite the darkness and the evil of the world. On the contrary, God became incarnate in these awful realities in order to make redemption and reconcile all and everything to Godself.


Here in Maban, in a forgotten little corner of the world, on the side roads of progress, where tens of thousands are living a too long exile, Christian hope is born again in the lives of those of Sinar, Mary and Lucy.

THE HERO OF BUNJ - DOCTOR ATAR 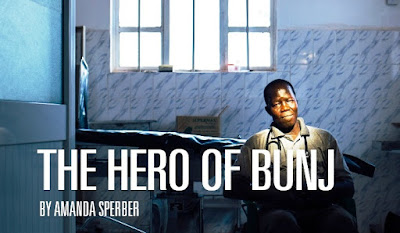 Besides being my doctor and taking care of my health, Doctor Atar has been an inspiration to me all these three years. I think you will enjoy this story about him:
http://roadsandkingdoms.com/2017/the-hero-of-bunj/ 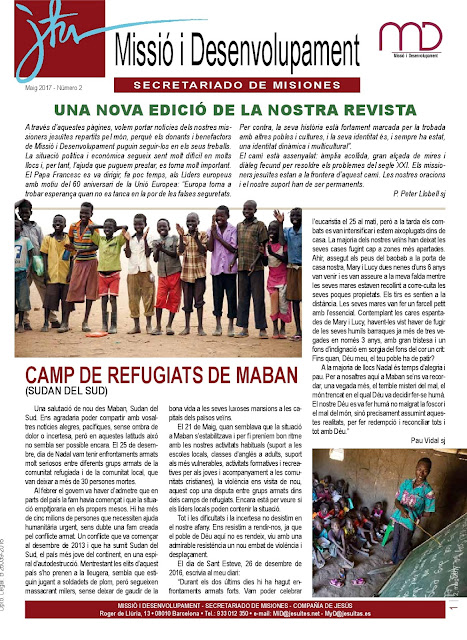 ENG
You will find all the past JRS Maban newsletters here:
https://jrsmabannews.blogspot.co.ke/ 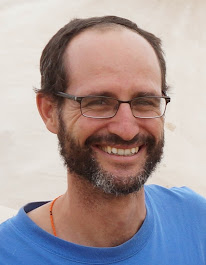